New Delhi: Delhi Dynamos, the Indian Super League (ISL) team directed a jibe towards All India Football Federation (AIFF) and all the other parties involved in the organization of Super Cup on Saturday after they received a walkover in the quarter-final match against East Bengal.

“UPDATE: Owing to the inept handling of the situation by all concerned, Delhi Dynamos have had to travel to Bhubaneswar for the second time and get a walkover in the ongoing Super Cup. @eastbengalfc failed to show up for their clash. #HeroSuperCup,” the club tweeted. 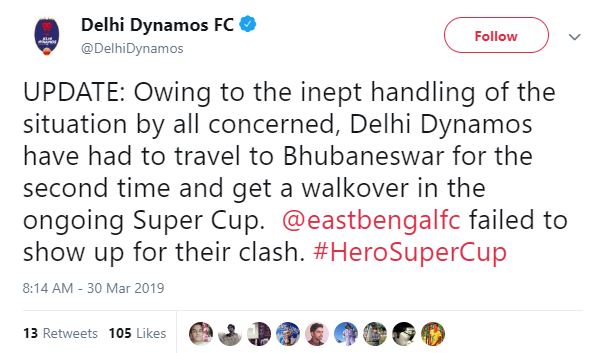 This was the second time that the club traveled all the way to Bhubaneswar for their match only to be handed a walkover because an I-League team did not turn up for the game.

Earlier, the Dynamos were scheduled to take on Gokulam Kerela on March 16, but Kerela did not turn up for the match due to the I-League clubs boycott of the tournament.

All I-League clubs had initially decided to boycott the competition so to express their solidarity Minerva Punjab, Aizawal FC, and Gokhulam Kerela FC did not travel for their qualification matches.

Chennai City FC and Real Kashmir are the only teams to come out of the alliance to take part in the round of 16 matches, but East Bengal, Mohun Bagan, NEROCA FC, and Churchill Brothers are the four I-League clubs still standing firm on the boycott.