KASHMIR: Jammu and Kashmir police registered an FIR against a Twitter user, identified as Ashish Kaul, on Saturday over “abusive” and “offensive” tweets about Kashmiri Muslims that sparked widespread outrage.

Ashish Kaul is a Kashmiri Pandit and works as a senior consultant for a Development Dimensions International (DDI World), the international HR and leadership development consultancy.

The hate-monger’s views sparked outrage among Twitter users, with some asking the company to sack him. Ashish’s abusive tweets and handle were deleted shortly but screenshots of the hate-speech were widely circulated online.

Ashish spewed venom against Kashmiri women in a series of tweets saying:

“I love when Kashmiri Muslim women cry on roads-yeh masoom tha, begunah tha! Amarnath Cha thuss ya Aazadi- the proof is in the casualty chart of last 1 year, sorry 28 years! We are killing, maiming and raping you at will! Ha Haaa Cry aloud Aazadi. 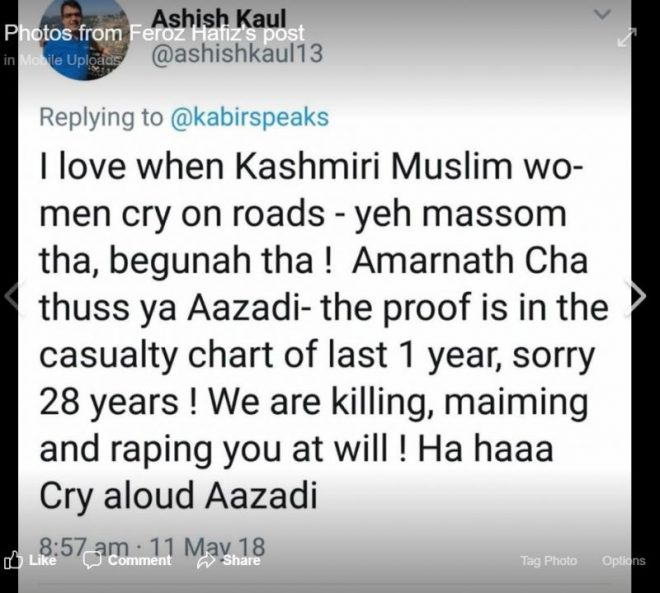 Another tweet by Ashish said, “Kill the bastards economically and let them sell their daughters, wives in Delhi, Mumbai and Chennai to feed themselves!”

The company also acknowledged the issue and had already informed about the sacking of Ashish.

It has tweeted, “DDI immediately launched a full investigation upon discovering this issue. We do not condone violence of any kind, & this issue goes beyond a simple matter of employment. We can verify that this person no longer works for DDI, & we are continuing to address the situation fully.”

“We have registered an FIR against the person who has spewed venom against Kashmiri women and abused people of Kashmir. We are in touch with Delhi police. We will arrest the person and block his Twitter account,” J&K Director General of Police Shesh Paul Vaid told Greater Kashmir, reported IBTimes.