Colonel Raj Kumar Kapoor passed away at the age of 87, on Wednesday night at Ritambhara’s hospital, due to age-related issues; a family member informed the media.

Shah Rukh Khan took to his Twitter handle to offer his condolences and wrote, “He loved me so much. Encouraged me.

And today if I am used to being mollycoddled on sets it’s because of this man who made a ‘Fauji’ out of a boy, like his own. Will miss you Sir…always. May u find peace in ur new mission.” 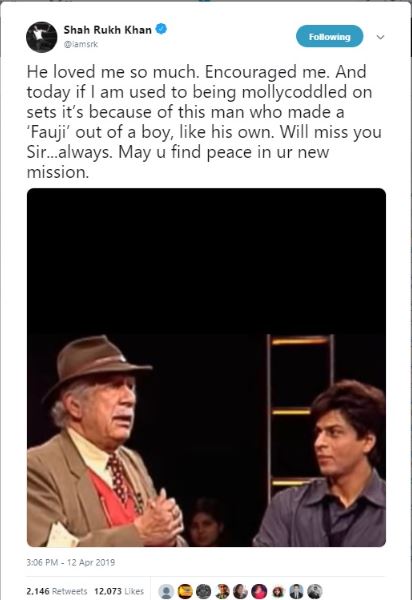 Bollywood filmmaker Shekhar Kapur responded to Shah Rukh Khan by tweeting, “Yes, I remember well the day the ‘Colonel’ brought you to my house during Faujj. ‘Watch this young man’ He said. And he was so right. What a wonderful compassionate man” 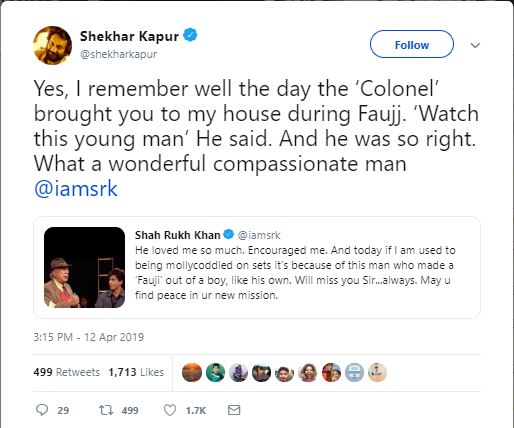 Fauji was Director Colonel Raj Kumar Kapoor’s earnest effort. In 1989, Fauji happened to be one of the most popular and unique shows. During the era when mythological series like Ramayana and Mahabharata became popular shows, Fauji gave DD National’s audience a quirky content, about a training programme for Army commandos.