Jumping to his friend’s defense, SRK took to his Twitter handle and wrote, “I hate clarifications on SM.

@karanjohar is technologically challenged but has other good qualities like his taste in clothes!? Just like Life, twitter doesn’t come with instructions, so mistakes r natural….& also he has fat fingers. Go easy all, Make Lov not War…it’s more fun.” 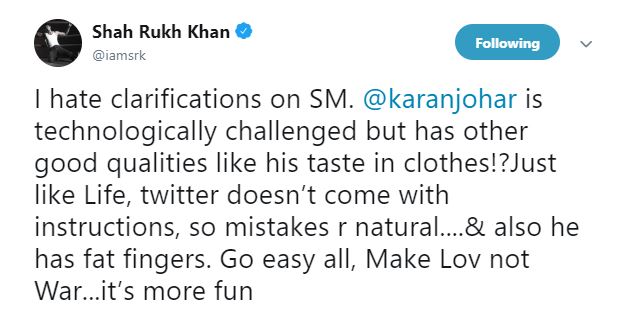 This comes almost an hour after KJo tweeted clarifying his stance on the situation. Fans of SRK assumed that the like was intentional, until Karan himself tweeted to clear the air, calling it a “technical problem” with his Twitter account.

“Guys having a technical problem with my twitter account! Strange things are going on! from uploading shoe picture and gibberish to liking tweets I haven’t even read and would NEVER even acknowledge! Please bear with me and I apologize for any inconvenience! Sorting it out asap,” KJo tweeted. 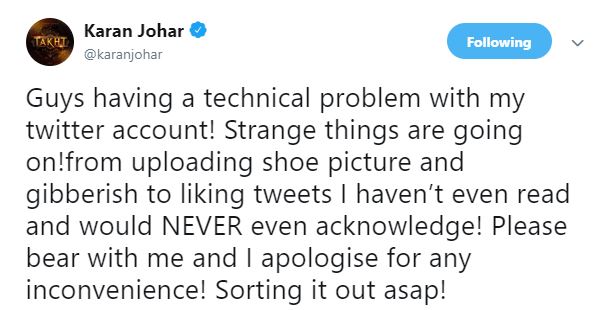 The 46-year-old filmmaker got embroiled in a social media fiasco on Friday when due to some technical error, as stated by KJo, led to him liking an offensive tweet about his friend while praising Akshay Kumar’s ‘Kesari’.

The tweet by a user called Mannu Yadav read, “Half day colls [collections] of Kesari on Holi day (which is worse than pre Diwali day) [is] greater than Zero full festival day collection.”

In the tweet, the user went on to abuse SRK saying that he was nothing compared to Akshay, whose film is ruling the theatres right now.

The fans of SRK went on a tweeting spree against the filmmaker after he liked the tweet. In no time, #ShameOnKaranJohar started trending on the social media platform. The hashtag has been trending since then and fans have been bashing and sending hate messages to KJo.

The filmmaker is no stranger to trolls and is often targeted on social media. KJo had recently slammed trolls and admitted that it “really bothers” him when his twins, Yash and Roohi are targeted.

The witty filmmaker managed to engage in some funny wordplay with the name of the song, referring to the Twitter chaos. He wrote, “Aaj twitter pe thodi gadbad ho Gayi but baaki sab #firstclass hai.”

Directed by Abhishek Varman, the film is slated to hit the big screens on April 17, this year.

Meanwhile, ‘Kesari’ released this Holi and managed to earn Rs. 21.50 crore on its first day at the ticket windows.

The film is bankrolled by KJo’s Dharma Productions.