Noted film critic and trade analyst Taran Adarsh shared the news on his Twitter handle along with a picture of the film’s cast.

In the picture, Fatima can be seen sitting on a chair dressed in a western outfit. She is surrounded by Saif and Ali dressed as ‘men in black’. Both the actors are donning black sunglasses and to highlight with an additional effect, Ali is wearing a silver chain as Sara is all smiling for the camera. 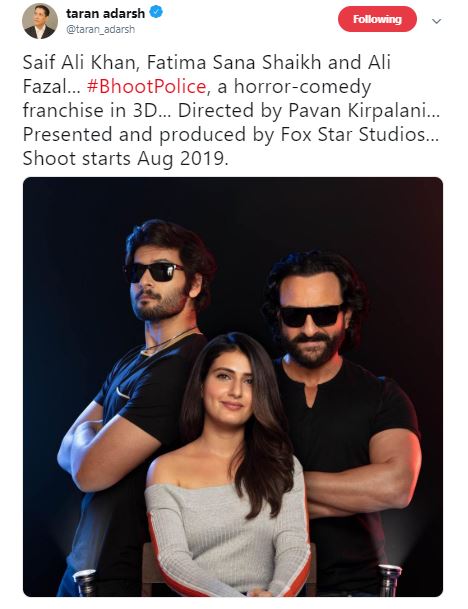 This is the first time that Saif and Fatima will be seen sharing screen space. ‘Bhoot Police’ will be directed by Pavan Kripalani, who earlier helmed films like ‘Ragini MMS’ and ‘Phobia’, among others.

Reportedly, the film was initially titled ‘Tantrik’ and Abhishek Bachchan was set to play the lead role. However, due to some unknown reasons, Saif was roped in for the film.

The release date of the film has not been revealed by the makers yet.

Meanwhile, Saif is currently busy with ‘Taanaji: The Unsung Hero’ in which plays an antagonist. The film also stars Ajay Devgn.