New Delhi: The makers of the film ‘Good News’ starring Akshay Kumar and Kareena Kapoor Khan have postponed the release of the film from September to December this year.
Kumar posted a picture on Twitter announcing the new release date of the film. “Good News for a good start to the new year! See you on 27th December!,” he captioned the post. 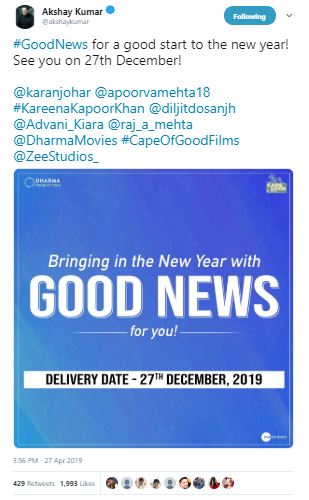 The story revolves around two married couples and their journey of love. In the film, Akshay and Kareena, as Honey and Monika, are seen trying to have a baby.
The shooting for ‘Good News’ went on floors in November last year and ever since the cast of the film has been keeping the anticipation of its fans alive with stills and videos from behind the scenes.
Earlier this month, actors Diljit Dosanjh and Kiara Advani, who are also essaying pivotal roles in the film, took to their respective Instagram handles to announce the wrap of the shooting of the film.
The videos shared by the actors show the cast and crew cutting cakes to commemorate the end of shooting.
Helmed by Raj Mehta, ‘Good News’ will hit the screens on December 27 this year.
[source_without_link]ANI[/source_without_link]