Apart from garnering immense appreciation for his roles, the actor has also made a name for himself in the music industry- thanks to his rapping skills. And now achieving another feat, the actor launched his independent music record label- IncInk.

Ranveer shared the news on his Instagram account and wrote, “My passion project. A manifestation of a certain vibe.

#IncInk is an independent record label formed by artists for artists…to discover, nurture & promote exciting talents from across India. Presenting #KaamBhaari, #Spitfire & #SlowCheeta from the different hoods of our country. Let’s show these boys some love @kaambhaari @ntnmshra @_slowcheeta_@neranee @incinkrecords.” 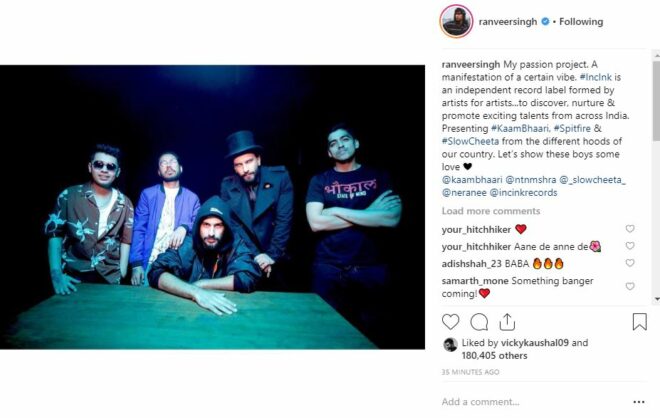 He shared another post on the photo-sharing application, which features the record label’s logo. He captioned it as, “Inclusive. Independent. This is the soul of #IncInk – my passion project.
@incinkrecords.” 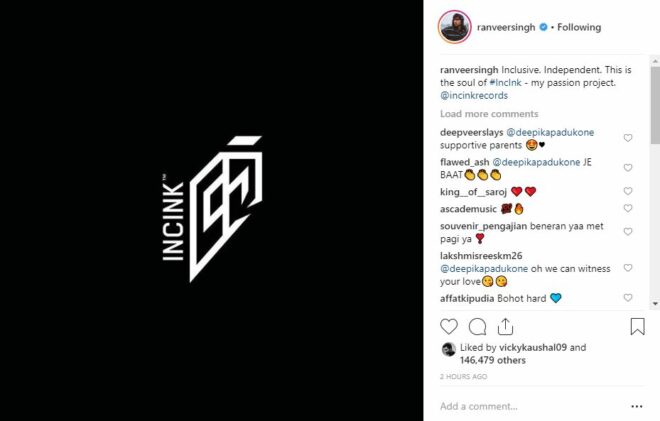 According to Indian film critic and trade analyst Taran Adarsh, Ranveer has launched the record label with filmmaker-musician Navzar Eranee.

With the new label, Ranveer aims to promote raw talent and give them a platform to showcase their skills.

The first three talents being launched via the label are Kaam Bhaari (who has sung Zeher), slow cheetah and Spitfire.

Reportedly, ‘IncInk’ will launch its first single titled ‘Zeher’ and its and music video today.

Apart from this, Ranveer is currently working on Kabir Khan’s sports drama titled ‘83’. The film is based on India’s historic win against West Indies at the 1983 world cup and the actor will be seen playing former Indian skipper Kapil Dev.