New Delhi: Rajkummar Rao is putting out major boyfriend goals as he has posted the sweetest birthday message for his girlfriend and actor Patralekhaa, who turned 29 on Wednesday.

Rajkummar took to Instagram to share a gorgeous picture of Patralekhaa alongside a caption that read, “It’s a special day for the most awesome girl. Happy birthday to the beautiful and kind @patralekhaa. May your special day and every day that comes hereafter be filled with happiness and joyous moments.” 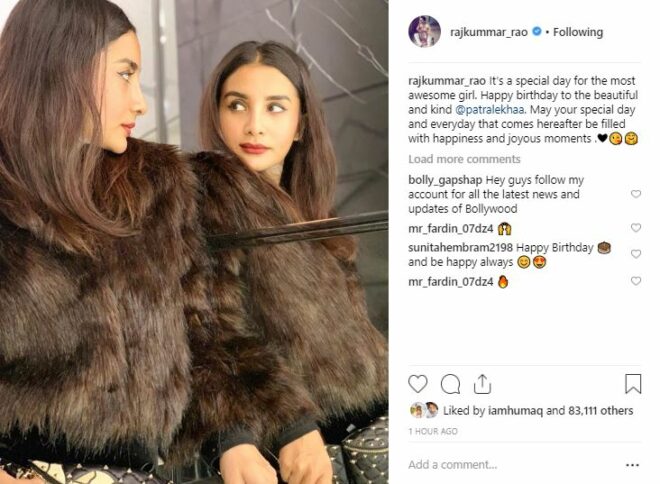 The ‘Newton’ actor also opened up about his relationship with Patralekhaa on a recent episode of the popular chat show ‘Koffee with Karan’.

The couple’s love story also featured on Humans of Bombay page on Instagram recently. Both the actors took to their social media pages and shared the story behind how they met and fell in love.

In the post shared by Humans of Bombay, Patralekhaa, who debuted in Bollywood with ‘City Lights’ opposite Rajkummar in 2014, shared how she met him and eventually fell in love.

She shared, “I saw him for the first time in LSD. I thought the weird guy he played was actually what he was like. My perception of him was tarnished! He told me later, that he first saw me in an ad & thought, ‘I’m going to marry her.’ It was so ironic! Once we began working together–it was magic. The kind of passion he had was powerful & I couldn’t respect him any more than I did then! We spoke about our work, love for cinema, passions…

I saw him through his struggles, never giving up. How could we not fall for each other? We didn’t officially go on dates, but we’d go for drives, movies, or just sit at home. We accompanied each other for auditions, just for support. All we needed was that understanding.”

On the work front, Rajkummar will be next seen in ‘Mental Hai Kya’, in which he reunites with his ‘Queen’ co-star Kangana Ranaut. He will also appear in ‘Made in China’ alongside Mouni Roy.

Meanwhile, Patralekhaa will be next seen in a Kannada film titled ‘Where Is My Kannadaka’.