New Delhi: Priyanka Chopra and Farhan Akhtar are all set to shoot for the final schedule of their upcoming Bollywood film ‘The Sky is Pink’.

Shonali shared pictures of herself alongside a long caption that read, “Overjoyed to be back in the saddle in my beautiful office in Roy Kapur Films prepping for our final schedule of The Sky is Pink – March 1 – 12.”

She continued, “For the first time in my life I didn’t feel sad to say goodbye to Viv or to LA and it’s only because I had this to look forward to so much. So much that I enjoy every single second of my every day even when I’m angsting over a location, a schedule, the budget, the editor any number of crises. I am filled with wonder and gratitude to be making the film I wanted to make, such a deep and personal story from the depths of my soul – and be so supported every step of the way by my amazing producer and crew. And of course my wonderful actors. Every single person in this film is special and loved by me. How lucky am I.”

“Thank you Ishan Bose-Pyne and Aisha Chaudhary – for sprinkling down stardust from your sky and bathing me in a rosy light with a pink hue,” Shonali concluded. 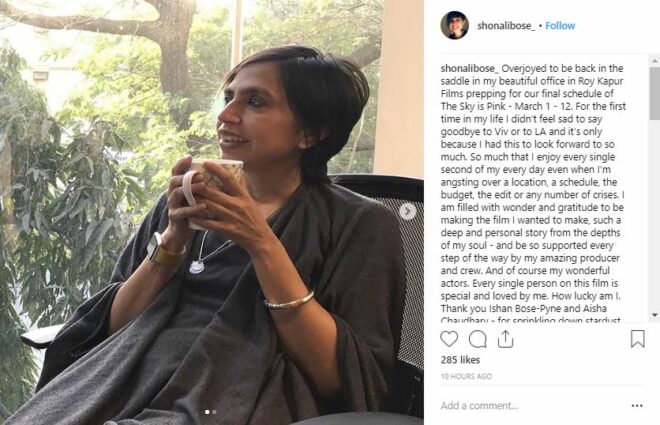 The film also stars ‘Dangal’ star Zaira Wasim. The movie is based on the life of Aisha Chaudhary, who became a motivational speaker after being diagnosed with an immune deficiency order at the age of 13. It is co-produced by Priyanka, Ronnie Screwvala and Siddharth Roy Kapur.

The filming of ‘The Sky is Pink’ began on August 8, 2018, and the second schedule began in London on October 13, 2018. Meanwhile, Priyanka is currently gearing up for her upcoming Hollywood film ‘Isn’t It Romantic’, which also stars Rebel Wilson, Liam Hemsworth, and Adam DeVine. The film will release in the United States on February 13, 2019, and also on Netflix, February 28, 2019. Farhan will soon start shooting for Rakeysh Omprakash Mehra’s next directorial ‘Toofan’.

Priyanka recently unveiled one of her wax statues at the Madame Tussauds Wax Museum in the New York City. She also revealed that her wax figure will also be unveiled in other cities across the world, including London, Sydney, and Asia.