New Delhi: Priyanka Chopra Jonas’ stunning Ralph Lauren gown has been the talk of the town ever since her Jaipur wedding in. The actor has now perfectly recreated the magic on the cover of Vogue magazine.

The ‘Quantico’ star took to Instagram to post a picture of her as the cover girl for the magazine’s wedding issue.

“My fairytale, Thank you Vogue Netherlands for making me your first cover girl of the Love & Wedding issue,” the caption read. 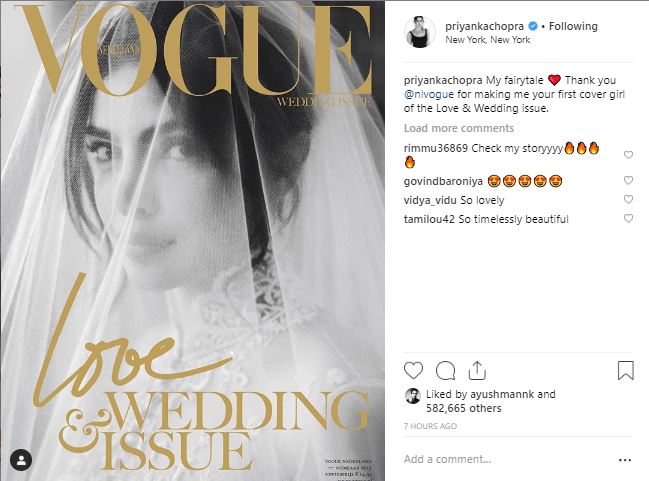 In the picture, Priyanka can be seen wearing her white embroidered Ralph Lauren wedding gown, gazing through her beautiful veil.

The actor tied the knot with Nick Jonas in two elaborate ceremonies at the Umaid Bhawan Palace in Jaipur. On December 1, they exchanged vows as per Christian traditions and on December 2, they tied the knot as per Hindu wedding rituals.

For the Christian wedding ceremony, the couple opted for stunning Ralph Lauren outfits, and for the Hindu wedding, Priyanka chose a red Sabyasachi lehenga coupled with diamond jewelry, while Nick looked every bit a ‘desi-dulha’ in a golden sherwani.

On the work front, Priyanka will be seen sharing screen space with Mindy Kaling in a film that revolves around a big wedding in India and the ensuing culture clashes. She has also wrapped up shooting for the film ‘The Sky is Pink’ which also stars Farhan Akhtar and Zaira Wasim.

Helmed by Shonali Bose, ‘The Sky is Pink’ is slated to release on October 11.