New Delhi: Actress Neha Dhupia has hit back at a publication who recently posted a piece with a headline that took a dig at her post-pregnancy weight gain.

The actress on Saturday took to Twitter to issue a strong statement against the fat-shaming. Captioning the post as “Thank you, next!”, the actress went on to write, “I don’t owe anyone an explanation because fat-shaming like this doesn’t bother me one bit.

But I do want to address this as a larger problem because fat-shaming needs to stop for EVERYONE and not just celebs. As a new mom, I want to be fit, healthy and energetic for my daughter. So I work out every day, sometimes twice a day because for me…’Fitness’ is a priority and not ‘fitting into’ society’s standards regarding looks. And I hope in the future people are kinder to each other while making such vapid and vile comments. To quote @Pattonoswalt…Be kind. It’s chaos out there.” 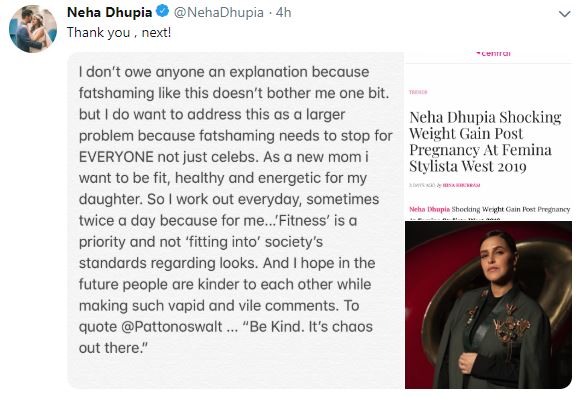 The post, which has received over two thousand views since being shared was hailed by the film fraternity, with names like Karan Johar and Sonam Kapoor coming out strongly in support of Dhupia.

Karan shared Dhupia’s post and tweeted, “Neha! You are an amazing Woman! You walk so many paths with humour…with intelligence and with abandon! It’s never about losing weight it’s always about gaining perspective! And I hope the woman who wrote this has gained some today….”

Sonam Kapoor, whose film ‘Ek Ladki Ko Dekha Toh Aisa Laga’ just released, too shared the post and wrote, “You are beautiful no matter what anyone says.”