The beautiful square tomb, built of red sandstone & grey Delhi quartzite interspersed by marble, is an epitome of striking symmetry & craftsmanship despite being ravaged by later Mughal nobles. It is still one of the most striking structures in all of Delhi, preserved in the state it was left in 1754.

It is said some of the building material from here was stripped to be used in the building of Safdarjung’s Tomb. Clearly the structural stability of the structure was severely compromised due to such massive vandalism. The tomb was stripped of its materials and all marble cladding on the dome when Safdarjung’s Tomb was built in 18th century and even later. Now, Aga Khan Trust for Culture along with Archaeological Survey of India has been restoring the dome marble to indicate original finish of the monument. 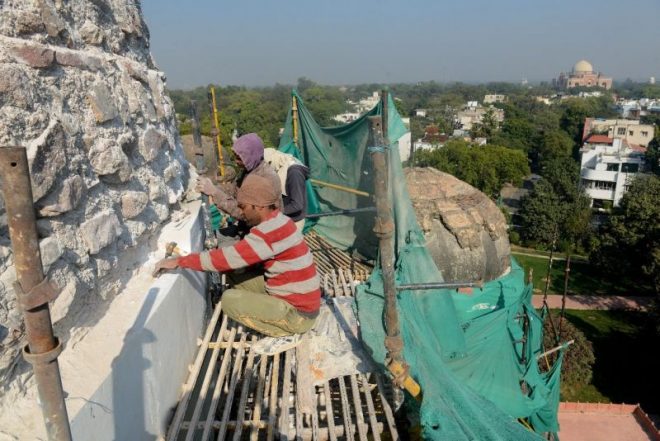 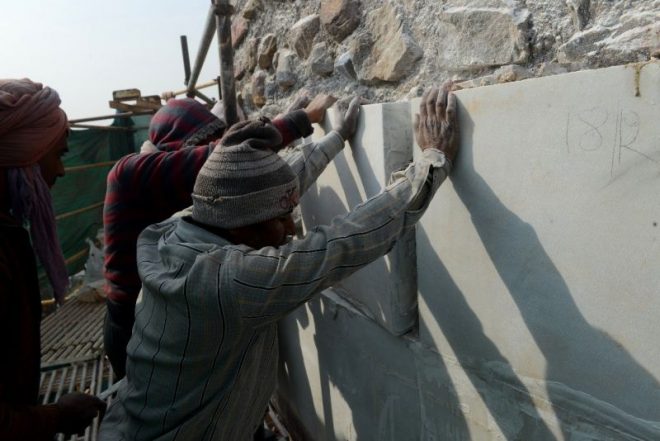 Since 2014, the Aga Khan Trust for Culture in partnership with the Archaeological Survey of India and with the support of InterGlobe Foundation has been undertaking conservation works on the crumbling Rahim’s Mausoleum, Restoring 10% of the Dome’s Marble Cladding, ASI has allowed only 10% of the marble cladding as the heritage body is against restoration in principle.
The cladding on the edges of the dome enhances the structural stability of the dome by putting a vertical thrust on the dome and not allowing it to crack at the edges or even collapsing.
The ASI Core Committee directed a symbolic addition of marble cladding. “This was a significant challenge and it has taken a dozen stone-carvers over three years to prepare and install the six-inch thick marble blocks on 10% of the dome. The stone carvers have used hand tools and manually lifted the heavy stone blocks,” said N C Thapliyal, AKTC project engineer.