“Lance Naik Wani epitomised qualities of a fine soldier. He always volunteered for challenging missions, displaying great courage under adverse conditions, exposing himself to grave danger on numerous occasions in the line of duty,” a press release from the President’s Secretariat said on Wednesday. 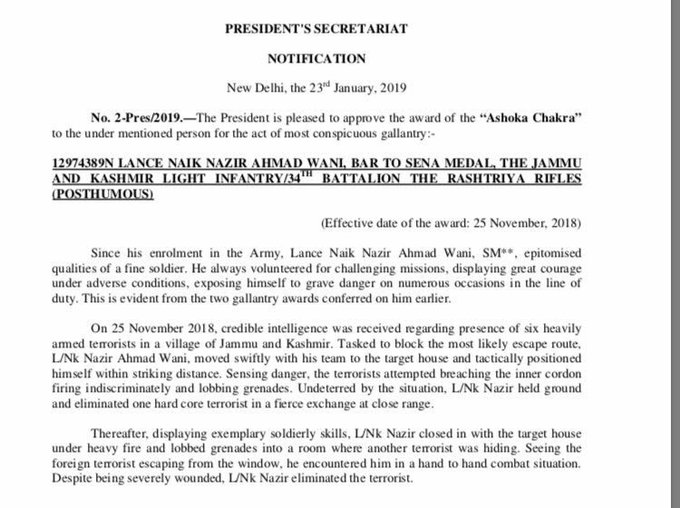 The 38-year-old martyr, a resident of militancy-hit Kulgam district lost his life while battling militants during operation in Shopian district of Jammu and Kashmir in November last year.

Wani, once a militants had started his career in Indian Army in 2004 with Territorial Army’s 162 Battalion and gradually went onto become a highly decorated army soldier.

In his one-and-half-decade long carreer, the ‘Braveheart’ has been awarded Sena Medal for gallantry twice in 2007 during Operation Augam and again in August 2018 for astounding bravery.

“He was a real braveheart and his enthusiastic participation in an anti-militancy operation had fetched him a Sena Medal in 2007 and again a bar to the Sena Medal last year on the eve of Independence Day,” a senior Army officer operating in Jammu and Kashmir said on condition of anonymity, reorted The Print.

He is survived by a wife and two children aged 20 and 18 years. His wife will receive the Ashok Chakra at the Republic Day Parade on 26 January.