New Delhi: Shahid Kapoor and Kiara Advani starter ‘Kabir Singh’ has been in the news ever since the film’s teaser came out. Audiences will soon be able to witness the pair’s chemistry and Shahid’s intense avatar in theatres as the team has wrapped up the film’s shoot.

The cast and crew celebrated the film’s wrap by cutting a cake. Kiara posted a picture of the celebration on Twitter.

She wrote, “Anddddd that’s a film shoot wrap for #KabirSingh see you on the 21st of June.” 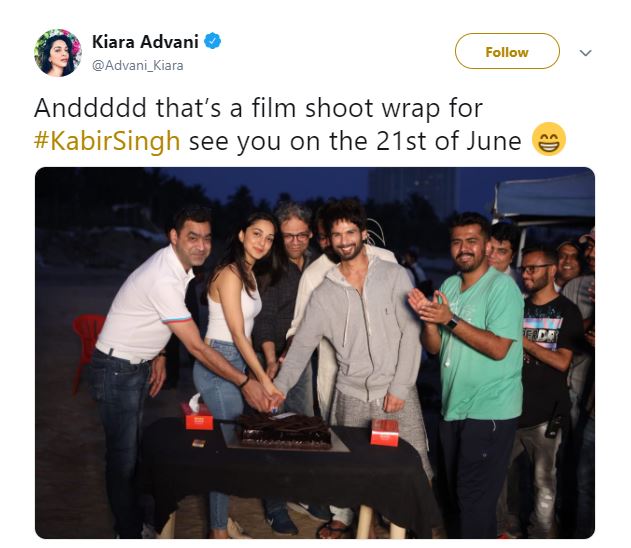 Shahid also posted a picture from their celebration on Instagram.

The teaser gives fans a sneak-peek into Shahid’s character, who is seen boozing, cocaine-snorting, and swearing.

As per media reports, Shahid went through an extreme physical transformation for his role as he had to look like a
young college student and also had to nail the look of a struggling alcoholic doctor.

The movie is a Hindi remake of Telugu hit ‘Arjun Reddy’. While the ‘Padmavat’ star plays the lead role in the movie, Kiara, who was recently seen in Netflix’s ‘Lust Stories’ essays the role of Preeti.

The original blockbuster starred Vijay Deverakonda and Shalini Pandey in the lead roles. After the teaser dropped online, Vijay took to his Twitter handle to appreciate Shahid’s avatar.

The film is directed by Sandeep Reddy Vanga and produced by Bhushan Kumar, Murad Khetani, Krishan Kumar and Ashwin Varde.

‘Kabir Singh’ will hit the big screens on June 21 this year.