New Delhi: Parineeti Chopra recently posted a throwback picture from the sets of Kesari, in which she can be seen posing with her co-star Akshay Kumar and it is safe to say that the two characters look happily in love with each other.

The ‘Ishqzaade’ actress has been quite active on Instagram and uploaded the teaser of the much-awaited film as well as shared some candid moments with Akshay.

The actress took to her Instagram account where she posted the picture of her sitting on a wall in a gorgeous blue and pink salwar kameez looking amused whereas the actor is standing next to her looking like the handsome hunk he is in a lavender kurta and turban which she captioned, “#Kesari”, adding a leaf emoji. 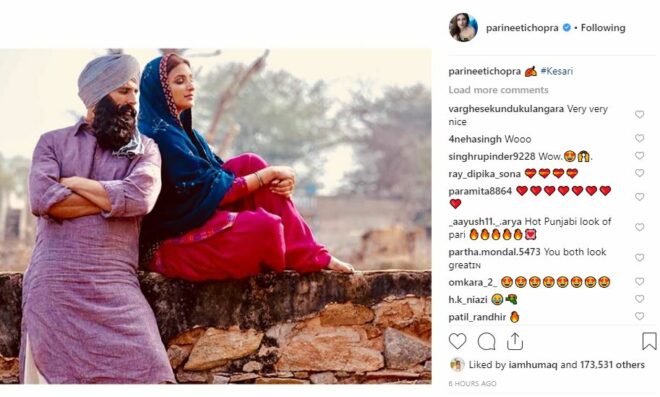 ‘Kesari’, based on the 1897 Battle of Saragarhi, where an army of 21 Sikhs fought against 10,000 Afghans, will see Akshay essaying the role of Havildar Ishar Singh.
The film, which is directed by Anurag Singh, is all set to hit theatres on March 21, giving fans a perfect Holi gift.
Apart from ‘Kesari’, Akshay will also be seen in ‘Good News’ and ‘Mission Mangal’, while, Parineeti will soon star in ‘Sandeep aur Pinky Faraar’ and ‘Jabariya Jodi’.