New Delhi: Veteran Bollywood actor Rishi Kapoor left his fellow celebrities and fans in shock when he flew to the United States last year to seek medical treatment. He is often visited by his friends from the film fraternity and recently Rishi’s brother Randhir Kapoor along with his daughter Karisma Kapoor paid a visit to the veteran actor.

In the picture, Rishi can be seen sharing smiles with Randhir, Karisma and Neetu in a hospital.

Karisma captioned the happy picture as, “So wonderful catching up with Chintu uncle in NY ! He looks so handsome and I always enjoy discussing food and restaurants with the Kapoor brothers #family #newyork.” 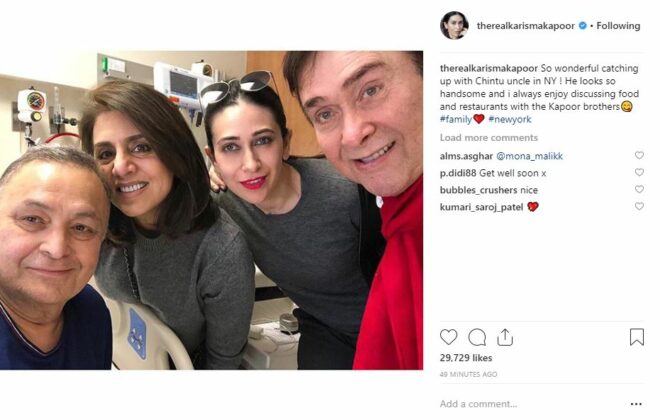 Earlier in the day, Neetu also shared the same picture on her Instagram account, revealing the only topic of discussion between the Kapoor brothers is food.
“The bestest brothers ever…Their conversation is only food though. Family bond forever,” Neetu had captained the photo.
Meanwhile, the eagle-eyed fans noticed that the photo appears to be taken inside a hospital ward with Rishi seated on what looks like a hospital bed.

Comments like, “What has happened to him?”, “Get well soon” and “How’s Rishi Kapoor?” flooded the comments section of the posts.

Rishi has been in New York since last year to seek medical treatment for an unknown health condition. He had shared the news on his Twitter handle and added that he would be back soon.

Neetu, who is quite active on Instagram, keeps sharing pictures from their huddles.

On the work front, Rishi Kapoor last appeared in ‘Mulk’ and ‘Rajma Chawal’.