New Delhi: Alia Bhatt, who made her Bollywood debut with Karan Johar’s ‘Student Of The Year’ in 2012, has become every one’s favourite with her phenomenal performances in films like ‘Highway’, ‘Udta Punjab’, ‘Dear Zindagi’ and ‘Raazi’.

Alia celebrated her birthday with her family and close friends at her residence in Mumbai last night. From Karan Johar to Ayan Mukerji to Pooja Bhatt to Ranbir Kapoor, many celebrities were spotted at her birthday bash.

KJo treated everyone with a new poster of ‘Kalank’ featuring none other than the birthday girl!

“Courage has never looked this beautiful! Meet the feisty #Roop in #Kalank on 17th April. happy Birthday my darling!!!!!” the post read.

Alia plays the role of Roop in the film and going by the latest poster, it’s safe to say that she lives up to her character’s name. The actor looks breathtakingly beautiful in the poster, wearing a red coloured bindi, traditional earrings and a baby pink dupatta over her head. The festive background adds the perfect amount of charm to the already stunning picture. 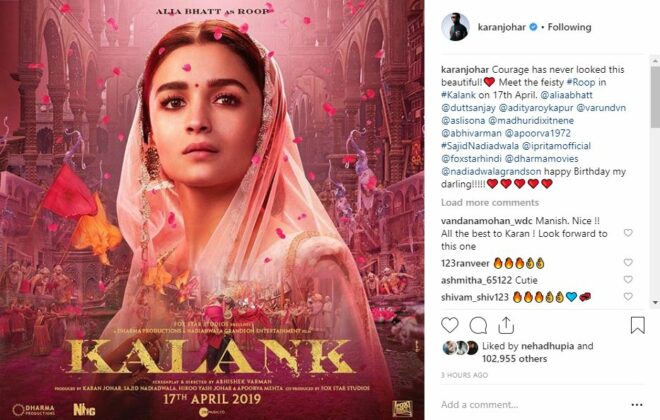 Alia’s first look was shared on the occasion of International Women’s Day (March 8). Karan presented Alia’s character Roop in stunning jewellery with a red duppatta and took the internet by storm.

Apart from Alia, the second posters of ‘Kalank’ featuring Aditya Roy Kapur and Varun Dhawan have also set the internet on fire.

The teaser was unveiled a few days back and it is sure to leave you spellbound with its larger than life sets, powerful dialogues, intense looks of the actors and amazing background score.

With a star-studded cast of Alia Bhatt, Varun Dhawan, Madhuri Dixit, Sonakshi Sinha, Aditya Roy Kapur, and Sanjay Dutt, this period drama set in the 1940s India, is definitely going to take you on an unforgettable journey.

The first look posters of the three men of ‘Kalank’ came out on March 7 and the leading ladies’ first looks were revealed on International Women’s Day (March 8).

The film was originally conceptualised about 15 years back by late Yash Johar and his son Karan Johar, who has bankrolled the film.

Abhishek Varman has helmed the period drama that releases on April 17 this year.