New Delhi: Get ready to witness another fresh pairing on screen! The Bollywood starlet, Janhvi Kapoor, who made her debut with ‘Dhadak’, has bagged yet another film. Janhvi will be next seen opposite Rajkummar Rao in the upcoming horror comedy ‘Rooh-Afza’.

Indian film critic and trade analyst Taran Adarsh shared the news on his Twitter handle. He also announced the release date of the film. 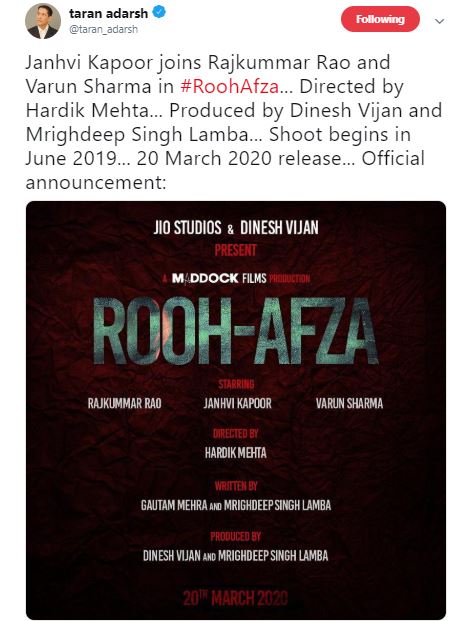 As per media reports, Janhvi will play a double role in the film and both her characters namely Roohi and Afsana will be contrasting personalities.

Giving out more details about the film, Adarsh had tweeted in December, revealing that the ‘Newton’ actor will play the role of a small-town goon whose plans go haywire when he has supernatural encounters.

“More on producer Dinesh Vijan and actor Rajkummar Rao project… Rajkummar Rao plays a small-time goon whose plans go haywire when he has supernatural encounters… Filming starts in early 2019… Jan 2020 release,” he tweeted at that time.

This will be the second horror-comedy film for Rajkummar, who earlier starred in ‘Stree’ and won millions of hearts with his performance in the movie.

The upcoming film will be helmed by Hardik Mehta and backed by Dinesh Vijan and Mrighdeep Singh Lamba. It will be written by Mrighdeep along with Gautam Mehra.

This marks the third collaboration of Rajkummar with Dinesh, who earlier bankrolled ‘Stree’ and upcoming film ‘Made In China’.

The film is all set to hit big screens on March 20 next year.

Apart from this, Rajkummar will be next seen in ‘Mental Hai Kya’, in which he reunites with his ‘Queen’ co-star Kangana Ranaut. He will also appear in ‘Made in China’ alongside Mouni Roy.