New Delhi: Priyanka Chopra and Farhan Akhtar-starrer ‘The Sky Is Pink’ is one of the most awaited films of this year. And you will soon be able to witness the dynamic duo in theatres as the entire team has wrapped up the shoot of the film.

Helmed by ‘Margarita With A Straw’ fame Shonali Bose, the upcoming movie also stars Zaira Wasim and Rohit Saraf. The entire cast and crew of the film got together to celebrate the wrap-up.

One of the picture shows the entire team posing together for a happy picture, another one shows Shonali making Farhan eat a chunk of cake. While, the third picture features Priyanka, Rohit, Zaira and Shonali posing for a lovely picture. 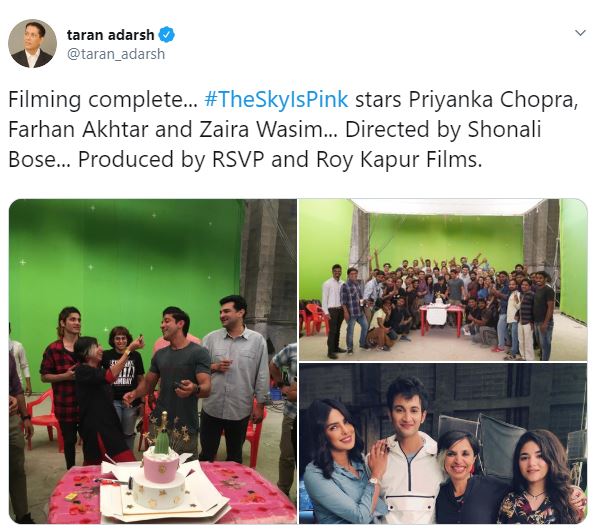 ‘The Sky Is Pink’ marks the Bollywood comeback of Priyanka after a hiatus of almost three years.

The team had recently shot the last sequence of the film in the Andaman and Nicobar islands.

The film is based on the life of Aisha Chaudhary, who became a motivational speaker after being diagnosed with an immune deficiency order at the age of 13. It also tells the love story of her parents.

It is co-produced by Priyanka, Ronnie Screwvala and Siddharth Roy Kapur and will hit the big screens on October 11, this year.

Meanwhile, Priyanka last appeared in Hollywood film ‘Isn’t It Romantic’, which also stars Rebel Wilson, Liam Hemsworth and Adam DeVine. The film released in the United States on February 13, 2019 and on Netflix on February 28, 2019.