Hyderabad: At the time of kingdom in India, Kings thought about the regional community and their languages. Official records of Nizam state and the Paigah reveal that administrative decisions were recorded in Telugu, Marathi, Urdu, Devnagiri and Kannada languages. This kept the local regional language alive.

According to article published in DC, They got hold of two records that reveal this. One is the land revenue records, called ‘pawtibahi’ of the Nizams which was recorded in 1924. The title page of the record is in four languages — Telugu, Marathi, Urdu and Devnagari.

The date of the file is 13-33-Fasli (of the Urdu calendar) and it contained detailed information of land surveys, specific directions to officials in the administration, regulations, decisions and projects for execution, ethics, and deadlines, and all these were hand-written in four languages, column-wise.

The second file is an estate document of the Paigah Amirship, and belongs to the period of Sultan-ul-Mulk, the last Amir of the Viqar ul-Umara, Paigah. These documents too are in Kanada, Marathi and Telugu apart from Urdu.

“Rulers of the Deccan region gave importance to the local dialect even though these documents were not meant for the public but were confidential records.

This was not done for political appeasement or to please anyone, but to preserve and protect the regional language. Local records have always been maintained in the language of that region. Being multilingual was a matter of pride because it connected the rule-rs with the people,” says Sultan Ghalib, former ruler of Hadhramaut

Another member of the Paigah family, M.A. Faiz Khan, says it was considered “a responsibility to preserve and protect the culture, and the Hyderabad zaban. In 1888, a British author gave a detailed description of his visit to Hyderabad, and mentions the visit to a temple by Viqar Ul-Umara and of a hunting expedition.”

“The author describes the ancient relics of a temple nearby and also the mood of the village on seeing the Paigah. The author mentioned that the regional language was widely spoken, and counted as an important dialect,” he added.

See the currency notes of Nizam state in which 4 languages are printed: 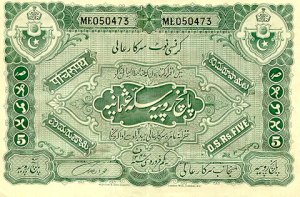