New Delhi: Seems like director Homi Adajania and actor Irrfan Khan are having a great time shooting for ‘Angrezi Medium’, and Homi’s latest post is proof. The director has been lately sharing several pictures from the sets of the film, leaving the fans wanting for more.

The team started shooting for the film last month in Udaipur. Since then, the director and the cast have been
sharing pictures from their sets, thus, making everyone excited for the film.

Recently, Homi shared a still on his Instagram story featuring Irrfan and the cinematographer of the film, who are busy playing cricket while Homi waits for them to resume shooting.

Homi captioned the photo, “Can we shoot please?” adding a rolling eyes emoji and laughing emoji.

In the photo, Irrfan can be seen batting while the cinematographer turns wicketkeeper. The actor is completely engaged in playing the game as he can be seen holding the cricket bat in his hands. 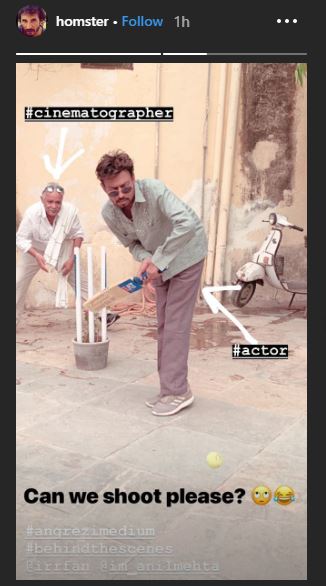 The film will mark Irrfan’s comeback on the big screen, post the brief break that he took, as he was seeking treatment for neuroendocrine tumour in London.

Irrfan had earlier shared a picture on his Twitter handle from the sets of the film, where he introduced his character Champak, who is a sweet shop owner.

The trio run sweet shops and are rivals to each other.

‘Angrezi Medium’ is the sequel to the 2017 hit film ‘Hindi Medium’, which starred Irrfan and Saba Qamar in the lead roles.

The film is being produced by Dinesh Vijan and apart from Udaipur, will also be shot in London.

Irrfan was diagnosed with a neuroendocrine tumour in March 2018. On April 3, through Twitter, he thanked everyone for their affection and support.