New Delhi: Fans of Bollywood actor Irrfan Khan have been eagerly waiting to watch him on the big screen. As the actor is busy shooting for his next release ‘Angrezi Medium’. The director of the film, Homi Adajania, just treated fans with a picture from the movie’s sets.

The filmmaker shared a happy picture with the 52-year-old actor, which shows the two sharing a hearty laugh together.

In the photo, Irrfan can be seen in the get up of his character, Champak, sitting on a scooter and Homi can be seen standing by his side.

He captioned the post as, “Life is better when you’re laughing … Okay… Actually, I’m just cracking a really f@#k all joke and @irrfan is a really fab actor. #laughingtillyourbellyhurtseveryday #shootlife.” 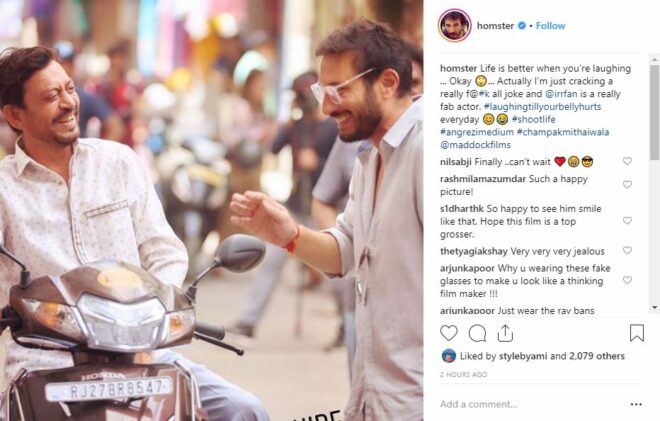 The film will mark Irrfan’s comeback on the big screen, post the brief break that he took, as he was seeking treatment for a neuroendocrine tumour in London.

Radhika will play Irrfan’s daughter in the film and reportedly, wishes to pursue higher studies in the UK.

Irrfan had earlier shared a picture on his Twitter handle from the sets of the film, where he introduced his character Champak, who is a sweet shop owner.

‘Angrezi Medium’ is the sequel to the 2017 hit film ‘Hindi Medium’, which starred Irrfan and Saba Qamar in the lead roles.

The film is being produced by Dinesh Vijan and apart from Udaipur, will also be shot in London.

Irrfan was diagnosed with a neuroendocrine tumour in March 2018. On April 3, through Twitter, he thanked everyone for their affection and support.

Irrfan was last seen in ‘Karwaan’ alongside Mithila Parker and Dulquer Salmaan.