New Delhi: Ranveer Singh and Alia Bhatt starrer ‘Gully Boy’ has successfully made its way into the audiences’ hearts. Many celebrities have taken to social media to praise the film, the latest celebrity to congratulate Ranveer for his spectacular performance is Will Smith.

The Hollywood actor took to his Instagram to share a video where he can be seen reacting to the film.

“Yo Ranveer! Congrats man. I am loving what you doing. Gully Boy. I have seen old school hip hop, seen hip hop all over the world. I am loving it. Go get it,” Will says in the video which also features few glimpses of the song ‘Apna Time Aayega’. 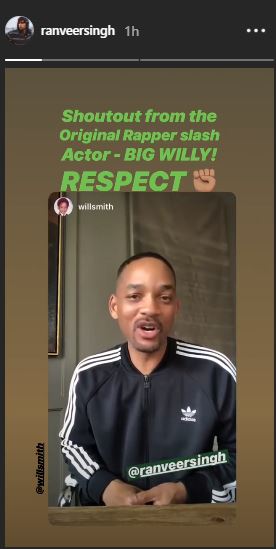 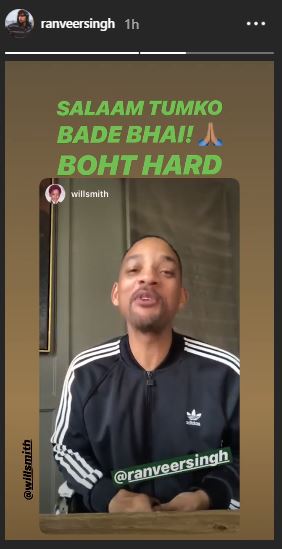 Opening to a positive response from the audience, ‘Gully Boy’ minted Rs 18.70 crore on its opening day.

According to trade analyst Taran Adarsh, ‘Gully Boy’ is expected to only go up from here with positive reviews flowing in.

The film became the biggest opener of 2019 beating ‘Uri’, ‘Manikarnika’ and ‘Thackeray’.

According to Box Office India, the film was bigger than Ranveer’s last two releases—‘Padmaavat’ and ‘Simmba’.

With ‘Gully Boy’ box office collection, Ranveer has given his second highest opening ever while this is the highest first day earning of a film starring Alia.

The film received Valentine’s Day advantage, especially in metro cities. While it was not a holiday yesterday, the film did exceptionally well in Mumbai, Pune and Bangalore.

‘Gully Boy’ is inspired by the lives of Mumbai street rappers Vivian Fernandes aka Divine and Naved Shaikh aka Naezy. The film is directed by Zoya Akhtar and released on Valentine’s Day,
February 14.