New Delhi: In the wake of the rising tension between India and Pakistan, actor and singer Diljit Dosanjh have postponed unveiling of his wax statue at Madame Tussauds in the national capital.

The actor who was supposed to unveil his figurine on Thursday took to his Twitter handle to make the announcement.
The ‘Udta Punjab’ actor said that amidst rising tensions between the two neighboring countries, he wants to stand with the Indian Army and thus will be rescheduling the unveiling of his statue.

Diljit wrote, “Our soldiers are fighting hard to protect the Nation. We stand by our Soldiers. Amidst the tensions rising across the Nation, have decided to re-schedule the launch of #MadameTussauds WAX Statue Will Post New Date Soon @MadameTussauds @tussaudsdelhi #BringBackAbhinandan.” 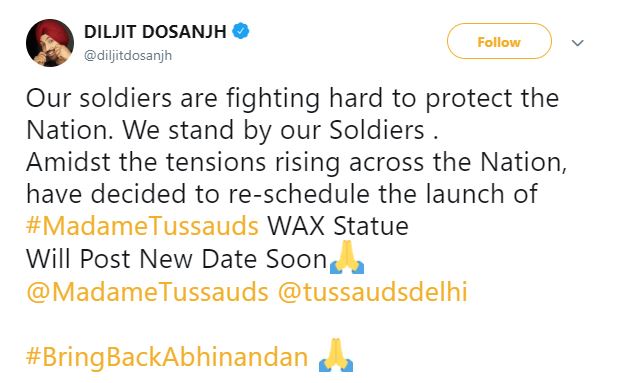 Madame Tassauds’s Twitter handle also released an official statement which read, “Considering recent events in the country, we wish to inform you that we have decided to re-schedule the launch of Diljit Dosanjh’s figure at Madame Tussauds Delhi slated for February 28, 2019. We all stand by our nation at this important juncture. We will inform you about the new launch schedule once it is finalized. We regret the inconvenience caused and hope to see you soon.” 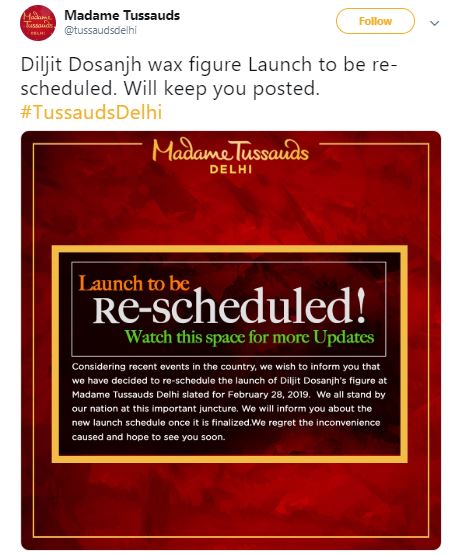 Diljit is the first Sikh to be featured at the celebrity wax museum. On Wednesday, Diljit had announced that he will be in Delhi to unveil his statue and had also sent out love to his fans via an Instagram post.

The actor had also previously donated Rs 300,000 to the wives of the CRPF personnel who lost their lives in the terror attack in Pulwama district of Jammu and Kashmir. He had shared a snapshot of the receipt on his social media and had urged his followers to contribute to the welfare of the martyrs’ families.

Due to rising tensions between India and Pakistan, many of the operations in the country are being hampered from shutting down airports to alerting railway stations.

The Indian Air Force (IAF) conducted air strikes on terror camps in Pakistan, which entire India hailed. From Bollywood celebrities to sports stars, from the general public to politicians, everyone came out in support of the operation taken in response to Pulwama terror attack that killed around 40 CRPF personnel on February 14. Pakistan-based terrorist organization Jaishe-e-Mohammed claimed responsibility for the attack.

The air strikes, which are being touted as ‘Surgical Strike 2.0’ took place on February 26 around 3:30 am using 12 Mirage 2,000 fighter jets. The aircraft dropped 1,000 kg laser-guided bombs on a major terror camp across the Line of Control, completely destroying it.

Meanwhile, on the work front, Diljit will next be seen in ‘Good News’ alongside Kareena Kapoor Khan, Akshay Kumar and Kiara Advani.