New Delhi: Diljit Dosanjh and Kriti Sanonstarrer ‘ArjunPatiala’, which was scheduled to release on May 3, will now hit the theatres on July 19 – the same day as Sunny Deol’s directorial ‘Pal Pal Dil Ke Paas’ starring his son Karan is set to release. 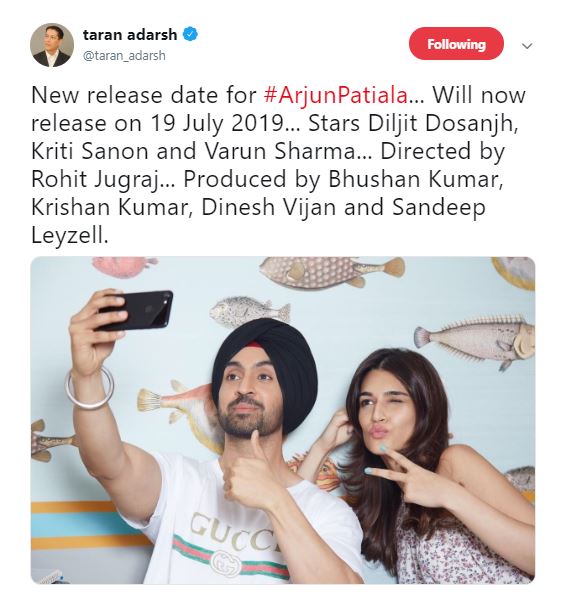 The first look of the flick, which was unveiled last year, featured Diljit and Varun as police officers, while Kriti sits on a chair in front of them pointing a gun to her head.

Kriti will play a scoop-hungry crime reporter in ‘Arjun Patiala,’ which is being directed by Rohit Jugraj.

This will be the second time when Diljit will be seen playing a cop in a Bollywood film after ‘Udta Punjab.’ The film marks Kriti and Diljit’s first collaboration together.

‘Arjun Patiala’ is being co-produced by T-Series honcho Bhushan Kumar and Dinesh Vijan of Maddock Films.

Meanwhile, ‘Pal Pal Dil Ke Paas’, also starring Sahher Bammba is a love story and has been shot across various exotic locales of Manali. This is Sunny’s third directorial after ‘Dillagi’ and ‘Ghayal Once Again’.