New Delhi: The release of Ayan Mukerji’s dream project ‘Brahmastra’, starring Alia Bhatt and Ranbir Kapoor, has been postponed. The fantasy drama film, which was initially scheduled to release around Christmas this year, will now hit the big screens in summer 2020.
Ayan announced the news on his Instagram account.
While according to the statement, the release has been postponed because the team needs “more time in order to get the VFX right,” multiple media reports have pointed out that the makers might have taken this decision to avoid locking horns with Salman Khan’s ‘Dabangg 3’ at the box office on Christmas 2019. 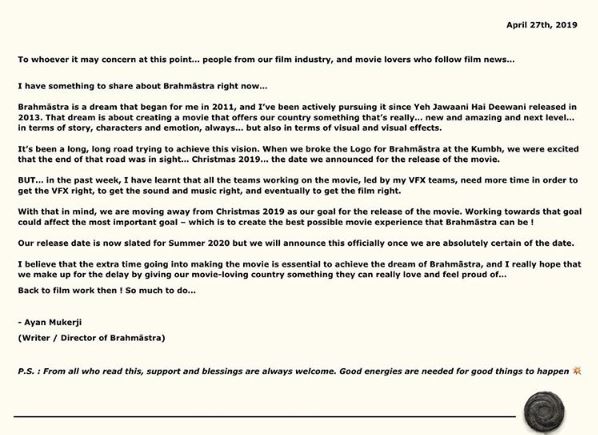 On Friday, Salman Khan announced that his upcoming flick ‘Dabangg 3’ will release on December 20, 2019.
“In the past week, I have learned that all the teams working on the movie, led by my VFX teams, need more time in order to get the VFX right, to get the sound and music right, and eventually to get the film right. With that in mind, we are moving from Christmas 2019 as our goal for the release of the movie,” Ayan clarified in the statement.
“Our release date is now slated for summer 2020 but we will announce this officially once we are absolutely certain of the date,” the statement read.
‘Brahmastra’ is first part of a sci-fi trilogy which has been created by Ayan. The film has been extensively shot in Bulgaria, New York, and Mumbai, among other places.
Apart from Ranbir and Alia, the film also stars Amitabh Bachchan, Mouni Roy, and Tollywood actor Nagarjuna.
[source_without_link]ANI[/source_without_link]