New Delhi: The controversy surrounded by missing JNU student Najeeb is not letting down. Social media operated by right-wing extremists are busy spreading fake news and are flooding unauthenticated information through tweets. One latest example is BJP MLA from Fatehpur Vikram Singh.

On Monday, Singh had posted on Facebook: “Ajeeb Najeeb/JNU student Najeeb had gone missing from campus many months ago. The BJP, ABVP and Sangh were blamed for his disappearance by his Naxal friends. Among them were Kejriwal, Rahul Gandhi ji, Mani Shankar Aiyar ji, Shashi Tharoor ji, Gulam Nabi Azad ji and leftist media.Now after almost a year, it has come to the fore that he.has joined the ISIS in their global jihad. I believe that all those secular politicians who had so readily spoken out will give their statements today as well. Two points that we draw from this series of events are 1. Universities like JNU, those of Kerala, Jadavpur University, Hyderabad University, etc. serving as recruitment centres of global jihad should be watched closely by central investigative agencies. 2. Are Naxals and Jihadists exchanging soldiers as part of an agreement in these centres.” As translated by Indian Express.

However, He deleted his post on Tuesday saying “found it to be an unauthentic old fake piece of news”. 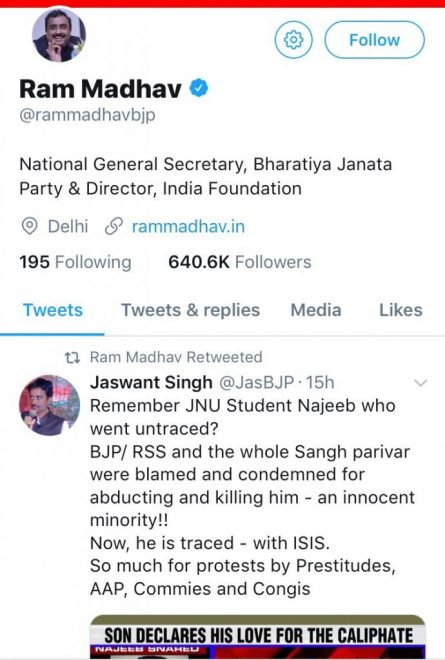 Remember JNU Student Najeeb who went untraced?
BJP/ RSS and the whole Sangh parivar were blamed and condemned for abducting and killing him – an innocent minority!!
Now, he is traced – with ISIS.
So much for protests by Prestitudes, AAP, Commies and Congishttps://t.co/XYgThr8mYq

However, Ram Madhav deleted the later.

Sorry! It seems I retweeted an old story. Colleagues alerted me. Untweeted it.

Najeeb had gone missing from the Mahi-Mandvi hostel of the Jawaharlal Nehru University (JNU) on October 15, 2016 following a scuffle with some other students, allegedly affiliated to the Akhil Bharatiya Vidyarthi Parishad (ABVP), the previous night.

The Delhi High Court today directed a forensic laboratory in Chandigarh to expeditiously examine the mobile phones of nine students, who are suspects in the case of disappearance of JNU student Najeeb Ahmed.

The court expressed concern over the delay in the forensic analysis of the seized phones and asked the laboratory to give its report by March 19..

A bench of Justice S Muralidhar and I S Mehta said it was “constrained” to issue specific directions to the director of CFSL, Chandigarh, to expedite the process of forensic analysis of the seized electronic devices and give the report to CBI which is probing the case.

The direction came after the court was informed by the CBI counsel that the investigating officer had visited the CFSL office on February 9, after repeated reminders sent earlier.

Advocate Nikhil Goel, appearing for CBI, said the forensic officials had informed the CBI officer that the mobile phones of the nine persons were still under examination and the report will be given soon. He said the experts also conveyed to the IO that several other requests from the Supreme Court and high courts to expedite examination were also pending.

To this, the court noted that this petition has been filed by Ahmed’s mother Fatima Nafees since he went missing in October 2016 and the court has been hearing it since then. Her anxiety is understandable, it said.

“From the CBI’s status report, analysis of mobile phones of the nine persons would be a critical step in the investigation,” the bench said.

The CBI also placed on record its status report in a sealed cover indicating the steps taken by it so far and the counsel for Ahmed’s mother was allowed to read only certain portions of it.
Senior advocate Colin Gonsalves, appearing for Nafees, refused to disclose the details of the report saying it would not be appropriate to give the details as the report has been filed in a sealed cover.

He said those who had threatened Najeeb a day before he disappeared have not been taken into custody yet and sought a court-monitored probe.

Regarding his prayer, the court said it does not wish to examine it at this stage as certain important steps indicated in the CBI’s status report are yet to be completed.

CBI counsel also told the court that a team from JNU had blocked its office here yesterday and even the officers were not allowed to enter or exit the premises. “It is not a fear-free environment. This is why we had requested for in-camera hearing earlier,” he said.

The high court had on May 16 last year handed over to the CBI the investigation into the disappearance of Najeeb, a student of M. Sc Biotechnology. His mother had moved the high court on November 25, 2017, seeking directions to the police to trace her son.

However, as the Delhi Police remained clueless about Najeeb’s whereabouts even after seven months since he went missing. The probe was handed over to CBI on May 16 last year.