New Delhi: Bollywood actress Bhumi Pednekar recently posted pictures with the world’s oldest female sharpshooters Chandro Tomar and Prakashi Tomar. The actress along with Taapsee Pannu is seen prepping herself for the biopic titled ‘Saand Ki Aankh’ based on the female shooters.

The “Toilet: Ek Prem Katha” actress took to social media and posted a couple of adorable pictures with the shooters and captioned it: “World’s Oldest Sharp Shooters – Chandro Tomar and Prakashi Tomar, the coolest SHOOTER DADIS (1)
My heart is full of gratitude, to be able to be a part of their bloody extraordinary story. The more time I spend with them, the more I realize how great their achievements are.” 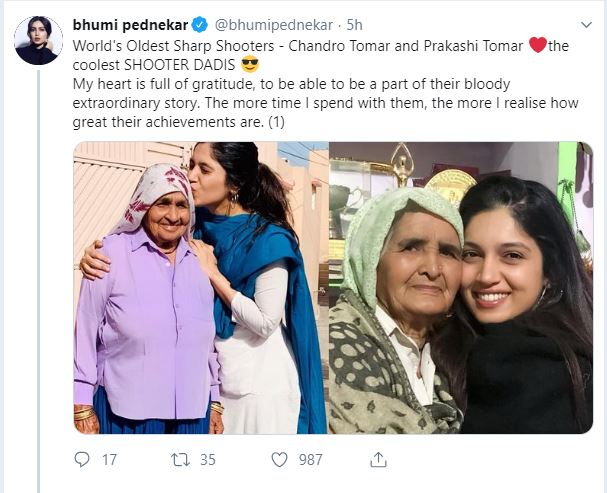 Followed by the pictures, the actor also tweeted some messages where she thanked the director of the film Tushar Hiranandani for giving the beautiful opportunity to the actress to become a part of the film. She also expressed the love she holds for the biopic in her heart.

“They are so special and blessed

@nidhiparmar for putting in your everything to make this happen and making us a part of it. (2)” wrote she. 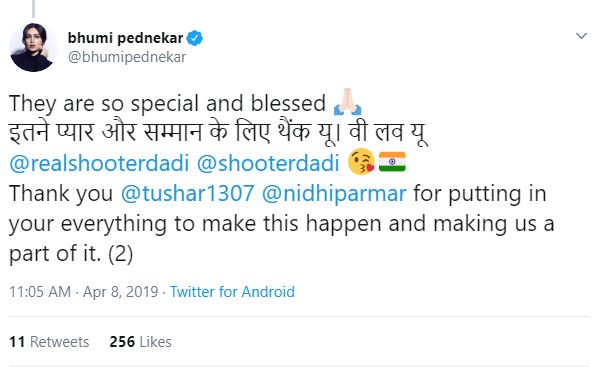 Really such immense love for you both

This journey is unlike any other with my sister in arms 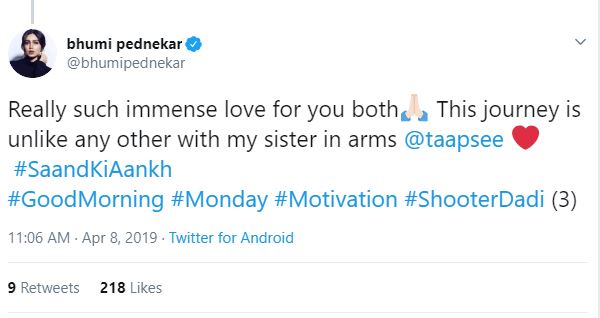 ‘Saand Ki Aankh’, which is being jointly produced by Anurag Kashyap and Nidhi Parmar, will mark the directorial debut of writer Tushar Hiranandani who has written films like ‘Main Tera Hero’, ‘Ek Villain’ and ‘Half Girlfriend.’