The film earned Rs. 23.20 crore in the opening weekend. Indian film critic and trade analyst Taran Adarsh shared the latest box office figures of the film on his Twitter handle.

Taran also revealed that ‘Badla’ has beaten the opening weekend collections of Amitabh’s ‘Pink’, which had earned Rs. 21.51 crore and ‘102 Not Out’, which minted Rs. 16.65 crore at the domestic box office. 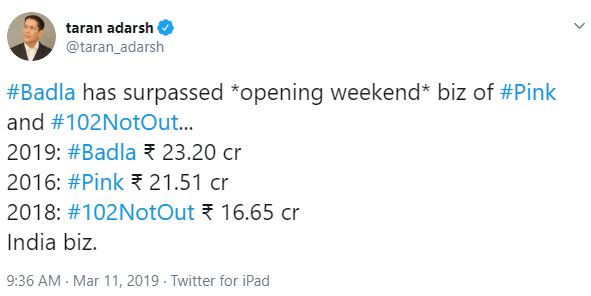 At the box-office, ‘Badla’ is facing tough competition from the Hollywood flick ‘Captain Marvel’.

‘Badla’ revolves around a murder mystery, where Taapsee’s character becomes the primary suspect after she is found with her boyfriend’s dead body and money in a locked room. Amitabh plays a successful lawyer, who has to defend and save her by solving the mystery.

This is Big B’s second collaboration with Taapsee after the critically acclaimed ‘Pink’.

Reportedly, the Sujoy Ghosh directorial is a remake of 2016 Spanish film ‘The Invisible Guest’, which was directed by Oriol Paulo.

The murder mystery has been widely shot in Scotland. It also stars Manav Kaul and Amrita Singh in pivotal roles. The film is produced by Shah Rukh Khan under his banner Red Chillies Entertainment along with Azure Entertainment.