New Delhi: Ayan Mukerji’s upcoming directorial ‘Brahmastra’ starring Ranbir Kapoor and Alia Bhatt has been stealing the limelight ever since its inception for all the right reasons!

Ayan, who made his Instagram debut yesterday, has been teasing fans with back-to-back glimpses from the film.

The director took to Instagram and shared another glimpse of his work and editing table of the film. The picture features a laptop on which the ‘Brahmastra’ logo can be seen in making while the other screen gives an interesting insight from the movie in which Ranbir can be seen on his knees with his arms spread. 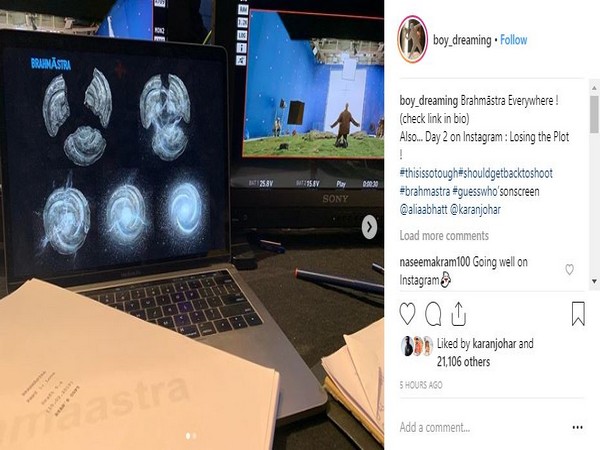 The makers and the cast of the film gave its fans a glimpse of the film’s logo in the sky at the concluding day of Kumbh Mela. This is the first time ever where the makers of a film have involved drones and announced the logo on such a huge scale on the auspicious day of Mahashivratri.

The team of the film shared a number of pictures from the event and also revealed the names of Ranbir and Alia’s characters. The team had also performed a puja on the banks of the Ganges at Prayagraj.

‘Brahmastra’ has been extensively shot in Bulgaria, New York, and Mumbai, among other places.

‘Brahmastra’ is first part of a sci-fi trilogy which has been created by Ayan. It is slated to release around Christmas this year.