New Delhi: Veteran actor Anupam Kher, who has previously shared screen space with Bollywood star Ranbir Kapoor in ‘Wake Up Sid’, recently met him and the two bonded over films and life lessons.

In a heart-warming post, Anupam called Ranbir the “finest actor” in India and also said that he is “hugely talented.”

“It is always delightful to meet one of India’s finest and my most favourite actor and person #RanbirKapoor. He is affectionate, loving, respectful, knowledgeable, compassionate and hugely talented. It was nice walking with him on the streets of NYC and talking about films, life and life’s lessons,” he wrote alongside a picture of the two.

In the photo, both the actors can be seen all smiles posing for a happy picture together. 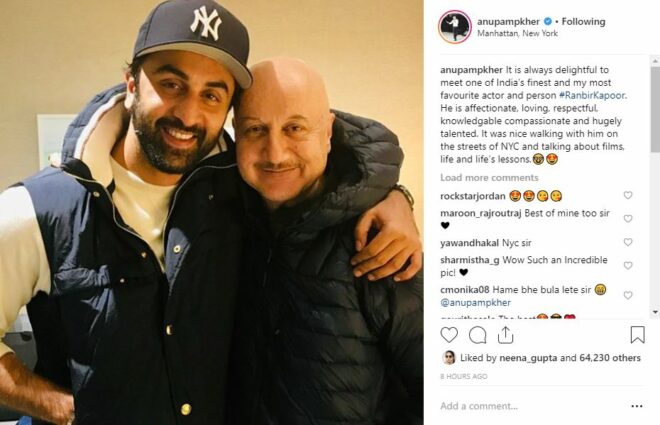 Anupam played the role of Ranbir’s father in Ayan Mukerji’s directorial ‘Wake Up Sid’. Apart from ‘Wake Up Sid’, the duo also starred in ‘Roy’.

Reportedly, Ranbir was in the New York City for his ailing father Rishi Kapoor, whose disease is still unknown to his fans.

On the other hand, Anupam is currently shooting in New York for an American medical drama titled ‘New Amsterdam’.
In September last year, Rishi announced on Twitter that he was flying to the US in order to seek medical care for all the years of “wear and tear at the movies”.

On the work front, Rishi was last seen in ‘Mulk’ and ‘Rajma Chawal’.

Meanwhile, Ranbir Kapoor is currently gearing up for his upcoming film ‘Brahmastra’. He has been paired opposite Alia Bhatt in the film. He also has a period drama titled ‘Shamshera’ and will be seen as a dacoit in the film.

Ranbir was last seen on screen in ‘Sanju’, a biopic based on actor Sanjay Dutt’s life, which became the highest grosser of Ranbir’s career. Meanwhile, Anupam was last seen in ‘The Accidental Prime Minister’.