New Delhi: Ananya Panday, the Bollywood newbie, who is gearing up for her debut with ‘Student Of The Year 2’ alongside Tiger Shroff and Tara Sutaria, has also wrapped up the shoot of the first schedule of her second film ‘Pati Patni Aur Woh.’

Ananya, who is all set to share the screen space with Kartik Aaryan and Bhumi Pednekar in the upcoming remake of the 1978 film, took to her Instagram stories to announce the scheduled wrap of the Mudassar Aziz directorial.
Posting a picture where she can be seen posing with Kartik and Mudassar, Ananya wrote, “Happy happy after a successful schedule wrap.” 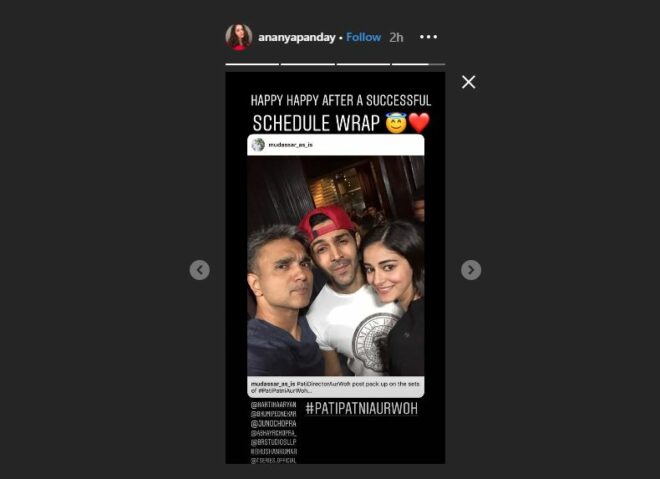 The film is an adaptation of the 1978 drama with the same title, which featured Sanjeev Kumar, Vidya Sinha and Ranjeeta Kaur in the lead roles. The film revolves around Ranjeet (Sanjeev), who has a son with his wife Sharda (Vidya) and is also involved with his secretary Nirmala.

Ananya will be making her ‘Koffee With Karan’ debut later this week, the promo of which released on Sunday.
The actor will seen sipping some hot brew with Karan Johar and her ‘SOTY 2’ co-stars Tiger Shroff and Tara Sutaria.
‘Student of the Year 2’ is slated to hit the screens on May 10 this year.