Nearly dozens of policemen injured on Thursday after hundreds of activists, allegedly belonging to right-wing Hindu groups pelted stones at the security personnel in support of the ‘hate killer’ Shambhulal Regar.

To thwart a rally by Hindu groups supporting the accused, the Udaipur Police on Wednesday issued a notice saying that Section 144 has been imposed and Internet services have been blocked for 24 hours to prevent disturbances or incidents of communal disharmony.

#BREAKING — Tensions erupt in Udaipur and Rajsamand district following the gruesome murder of a Muslim migrant labourer from West Bengal. Internet services have been blocked for 24 hours pic.twitter.com/VCW04TFPDO

Defying prohibitory orders, the Hindutva activists gathered near the Court Circle in Udaipur and held rallies and demonstrations.

Police restored to lathicharge to control the situation. Following the clash, both the sides got injured. Police said over 175 people arrested for violating prohibitory orders.

Following the protest, police have been deployed in the sensitive areas and section 144 of the Indian Penal Code (unlawful assembly) to continue in both districts.

Rajasthan: Section 144 imposed for 24 hours from 8 pm last night in Udaipur as a precautionary measure in light of a man murdered in Rajsamand. 2G, 3G and 4G internet services to remain suspended in the duration. 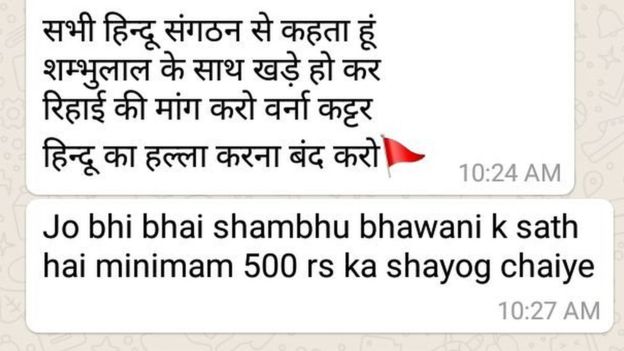 “We have frozen the bank account in which money was being collected in the name of Regar. Around Rs 3 lakh was deposited before the account was frozen… We will investigate those who deposited the money to check for any links with the accused,” said Anand Shrivastava, IG, Udaipur Range.