New Delhi: The release of Salman Khan starrer ‘Bharat’ is just a month and a half away and the actor has once again surprised his fans with yet another character poster from his upcoming film.

The ‘Bajrangi Bhaijaan’ actor took to Twitter to share his third look from the film, and also introduced his co-star Katrina Kaif. “Aur phir humare zindagi mein aayi ‘Madam Sir’, Katrina Kaif” he wrote along with the poster. 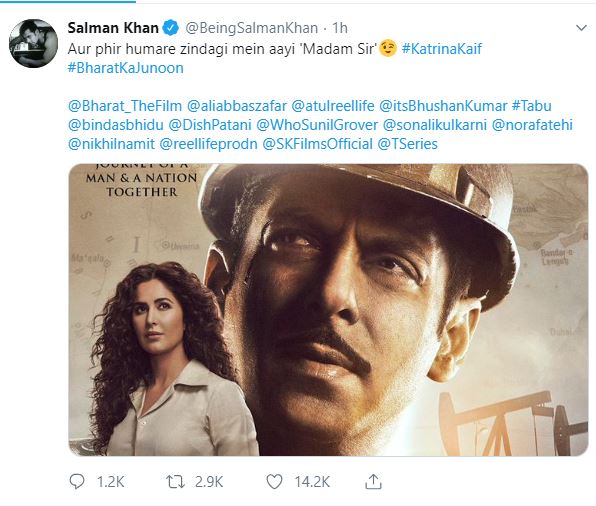 The new poster takes you back into the 70s where Salman is seen with a headlight helmet and moustache, while Katrina is looking all pepped up in formals.

The first poster gave a glimpse of Jackie Shroff while the second featured Disha Patani as a trapeze artist.
The one-minute and twenty-six-second teaser, unveiled in January, depicted Salman in several avatars, narrating the story of his character’s life.

According to reports, the actor would be seen in five different avatars in the film spanning over a period over 60 years.

‘Bharat’ is being helmed by Ali Abbas Zafar and is one of the biggest releases of the year.

This is Salman’s third collaboration with Zafar after ‘Sultan’ in 2016 and ‘Tiger Zinda Hai’ in the following year. Meanwhile, Salman and Katrina were last seen together in ‘Tiger Zinda Hai’.

The trailer of ‘Bharat’ will be out on April 24, whereas the film is slated to release around Eid this year.